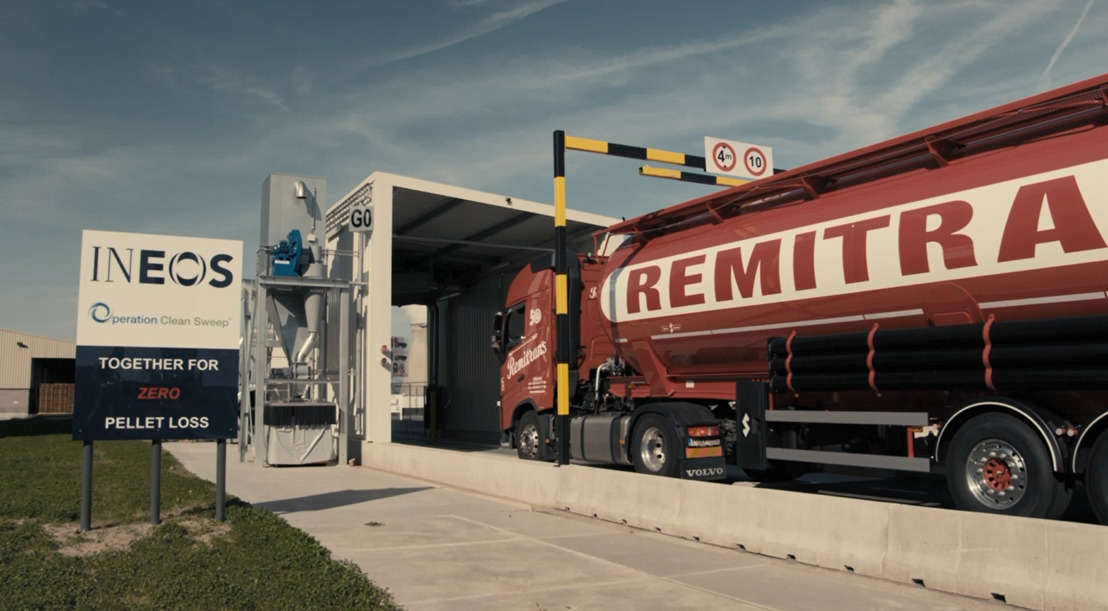 Trucks that want to leave the site of the chemical company INEOS in Lillo, Antwerp, after loading plastic pellets, will first have to go through the so-called blow-off line. This 'dry car wash' for trucks efficiently, safely and accurately blows away plastic pellets that have remained on the roof or chassis of the truck during loading. INEOS invested 700,000 euros in the covered blow-off line in order to prevent lost pellets from leaving the site and ending up in nature. The installation of the blow-off street is the final piece in a series of measures that have already been applied on the site for some time to reduce the loss of pellets to zero.

With the new blow-off line, INEOS is stepping up a gear in the fight against the unintentional loss of plastic pellets, a point that has long been high on the agenda. The pellets are used as raw material for all sorts of plastic products. In the past, trucks were systematically checked by hand: any surplus pellets left over after loading were blown off by the driver and swept up afterwards to prevent them from ending up on the roadside when he drove off. A steward checked all trucks before they could drive out.

From now on, this will be automated and the driver will be relieved of all worries. The blow-off line can best be compared with blowing a car dry in a classic car wash. The principle is the same: the truck drives through the installation at low speed, where powerful blowers blow away any plastic pellets left behind - even in hard-to-reach places on the truck. The pellets are collected in grids and sucked up so that they can be reused or recycled. After this 'washing', the driver receives a stamp: without it, the truck cannot leave the site.

Watch how the blow off street functions in the animation movie

Every pellet is one too many

At the INEOS site on the Scheldelaan in Lillo, sixty trucks with bulk cargo leave the site every day. Measurements show that the majority of them now leave the site virtually 'pellet-free': in 98% of cases, there are 0 to 9 pellets left on the truck (max 0.3 grams). With the blow-off line, INEOS can now also prevent the last remaining pellets from 'riding' with a departing lorry.

"Our goal is to reduce the loss to zero, or zero pellet loss," says Philippe Neirynck,
​Manager of Logistics Operations. "Every pellet is one too many. ”

INEOS is planning an additional installation of a similar blow-off line at the Zandvliet site (Styrolution) later this year.

The tiny pellets require an integrated approach to outsmart them.

Philippe Neirynck, Logistics Operations Manager:
​"We keep the site 'pellet-free' by using separation pits and walls to prevent the drainage of pellets into the verge. We also continually optimise our loading processes to prevent pellet losses at source: for example, we work with tailor-made collars around the loading pipes to catch any pellet splashes during truck loading. Once a week, we sweep the hard shoulder along the Scheldelaan, along which the trucks leave for their destination, with a broom truck, to prevent pellets from ending up in the Scheldt via the sewage system. The fact that hardly any pellets are found is encouraging. However, this buffer remains important to close the loopholes."

Each link in the chain counts

Given the complex logistics chain, it is very important to make the different actors aware of the importance of prevention measures. Operation Clean Sweep®, an initiative of the European plastics federation PlasticsEurope, unites sector companies and logistics partners to adopt a common approach in combating the loss of plastic pellets. ​ INEOS has been a member from the very beginning since its launch in Belgium in 2017 and is paying close attention to sensitising its own employees and logistics partners to the programme at its production sites.

Annick De Ridder, elderman of the port:
​"Already in October 2017, the Port of Antwerp was the very first port in Europe to sign up to the 'Operation Clean Sweep' programme, an initiative of the European plastics federation PlasticsEurope. Industry, logistics companies and the transport sector are all taking the lead in taking action together with the Port Authority to prevent plastic pellets from ending up in the environment. Plastics have an important place in our port, but no one wants to see pellets ending up in dock water or nature. I therefore applaud manufacturers such as INEOS for continuing to invest in additional measures to achieve zero tolerance."

Saskia Walraedt, director essenscia PolyMatters :
​"Operation Clean Sweep is much more than 'sweeping in front of your own door'. Every link in the chain bears a responsibility. The cooperation set up in the port area is a unique platform for exchanging good practices and is driven by PlasticsEurope Belgium, essenscia, the Port Authority, Alfaport Voka and transport federation Febetra. The goal is clear. All noses are in the same direction: no plastic pellets in nature. With this investment, INEOS underlines the common commitment to strive together for zero pellet loss."

Operation Clean Sweep® (OCS) is an international programme supported by PlasticsEurope. The initiative aims to prevent the accidental loss of plastic granules (in the form of pellets, flakes and powders) through the different links in the chain in order to avoid their release into the environment.

The OCS programme, which was first introduced in North America, has also been applied in Europe since 2015. The methodology of this programme has already contributed to the implementation of effective corrective measures in many companies in the plastics industry worldwide.

The Zero Pellet Loss Platform was created as part of Operation Clean Sweep. Various partners in the port of Antwerp - including Alfaport Voka, essenscia, Antwerp Port Authority, PlasticsEurope and Voka Chamber of Commerce Antwerp-Waasland - have joined forces for this purpose. The cross-sector action plan aims to prevent plastic pellets from being lost during production, storage, transport or processing. Under the wings of the platform, companies exchange good practices on preventive tools and infrastructures, but also on loading and unloading instructions for truck drivers.